Marvel’s Avengers is every Marvel/superhero fan’s dream. An expansive Avengers game that dives deep into some of the best Marvel characters in history, who could ask for more?  The game has been out for some months now and I am still absolutely loving it, with a playable base roster of Captain America, Thor, Iron Man, Black Widow, Hulk and Ms Marvel. We were completely spoilt from the get-go but Square Enix are nowhere near finished treating us fans!

With DLC announced pretty much straight away, we are months deep into the games launch and have already had two releases for season 1 of the DLC expansion packs for Marvel’s Avengers. Those being Kate Bishop: Taking Aim and Hawkeye: Future Imperfect, giving us the chance to play as both Hawkeye’s (which is awesome by the way) in their own storyline sections.

To add to this, we have another two DLC characters that have been confirmed for the future, those being Spider-Man and Black Panther. Which is unbelievable news as these are two of my favourite Marvel characters, so us Marvel fans are eating good! We are not short of awesome Avengers characters but to make it better, the developers Crystal Dynamics made it clear that Marvel’s Avengers is here for the long run. Meaning that we will be getting plenty of new content for years to come.

With that said, here’s my playable DLC character wish list for the future of Marvel Avengers:

Playing as Ant Man would give us one of the most unique experiences in a superhero game and his gameplay would vary massively from the rest of the current cast of characters. If you know anything about Ant Man, you know that he has the incredible power of size alteration thanks to the development of his Pym Particles and also possesses a genius level intellect. His powers would be amazing to use in Marvel’s Avengers because his size alteration could be used incredibly well during combat allowing it to become one of the most unique ways of fighting. Whether he would be shrinking himself down to small sizes and quickly bouncing between enemies or growing to humongous sizes and stomping out A.I.M soldiers, Ant Man would be a welcomed inclusion as a playable character. 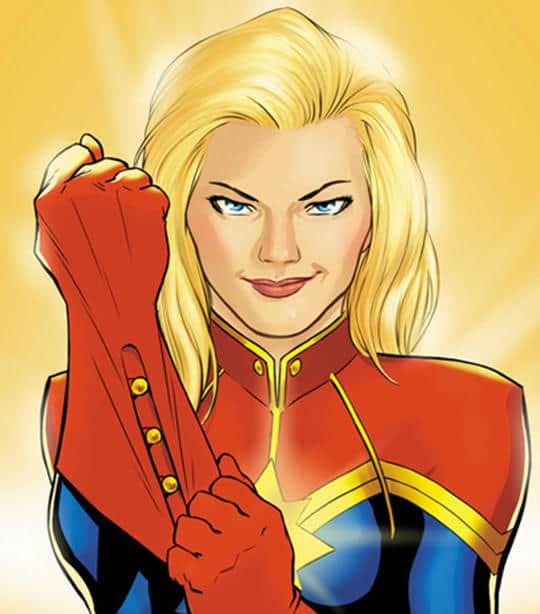 Carol Danvers, the second Captain Marvel, has been an incredibly popular character in recent years, whether you know her from the comics or the Marvel Cinematic Universe you will know that she is one of the most formidable Avengers in the Marvel universe!

Eagle eyed fans may have already noticed that Kamela Khan (Ms Marvel) has a detailed poster of Carol Danvers in her bunk of the chimera, with Carol appearing to already have a game model, enhancing the chances of her at least making an appearance in the game. But this isn’t the only hint to Carol, the Kree seem to be playing a big role in the background of A.I.M’s future plans. With Kree Sentry’s being present in the final battle of the ‘Reassemble’ campaign and scattered around the Future Imperfect timeline (as seen in Hawkeye: Future Imperfect), we know for sure that the Avengers would want aid from a certain badass Human-Kree hybrid cosmic hero.

With more and more hints to the Kree race appearing in the future of the Avengers storyline, It should be pretty certain we will at least get an appearance from Captain Marvel. And if so, she would come straight in being one of the most powerful characters on the roster! 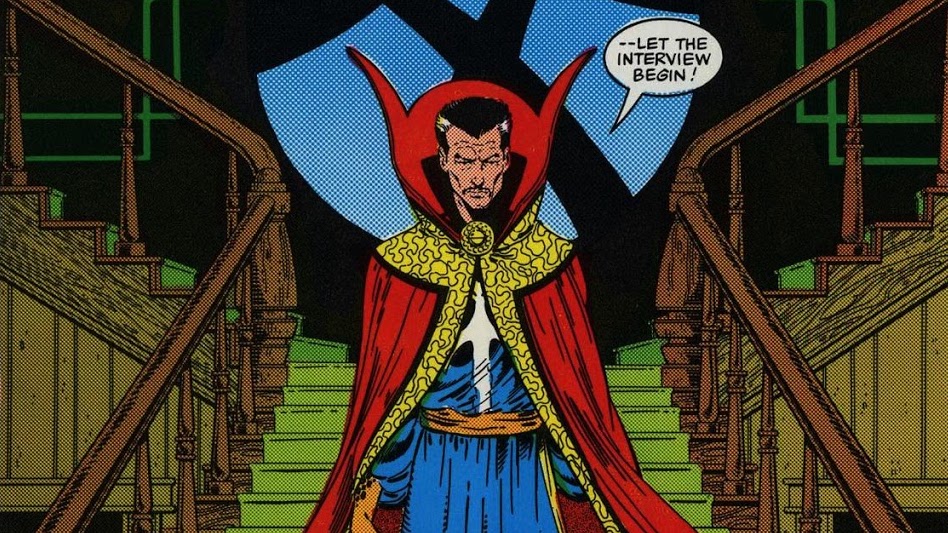 One of the most powerful sorcerers in the Marvel universe, Doctor Strange is on most people’s character wish list for Marvel’s Avengers and rightly so as well. With the MCU release of Doctor Strange: Multiverse of Madness next year, it would be a great opportunity to add Stephen Strange into the game to boost even more hype for the movie. But this is certainly not the only reason I’d like to see the Sorcerer Supreme assemble with the Avengers.

Bringing Doctor Strange into the game would no doubt be a lot of fun, being able to use all the magic that he possesses would make for not only an outstanding visual display but also really switch up the combat methods that us players would be able to use. Using objects like the Cloak of Levitation, the Eye of Agamotto and the Wand of Watoomb, players wouldn’t be short of using Doctor Strange’s wide range of abilities.

He would also pave way to more supernatural threats like Nightmare, Baron Mordo and even Dormammu, meaning the villains roster of Marvel’s Avengers can expand to more magic wielding threats and really switch up the current enemies that the Avengers face. Doctor Strange would be a fantastic addition and who wouldn’t want the Sanctum Sanctorum as a new outpost, right? Jessica Drew has been a fan favourite member of the Avengers and deservedly so as well, she is simply a great character. The former Hydra agent turned S.H.I.E.L.D. agent would slot straight into the storyline and could provide information and aid in the rescue of Nick Fury. With Spider-Man already announced, other Spider character’s may be side-lined for the time being but I’d really hope this isn’t the case.

Jessica Drew’s gameplay would vary quite a bit to Spider-Man’s in a lot of ways as not only is she a super powered badass, but she is also an extremely skilled spy and private investigator. This could open the doors to more varied missions with potential of solo missions with Spider-Woman infiltrating A.I.M, Kree or even Hydra (if they were introduced) facilities and using her skills to do what she does best.

As well as bringing an awesome gameplay dynamic, we would have access to all sorts of great costumes from Spider-Woman’s history. Outfits like her classic costume, a S.H.I.E.L.D uniform and maybe even a certain Julia Carpenter’s black suited Spider-Woman outfit. So ultimately, Spider-Woman would be a great addition to Marvel’s Avengers. 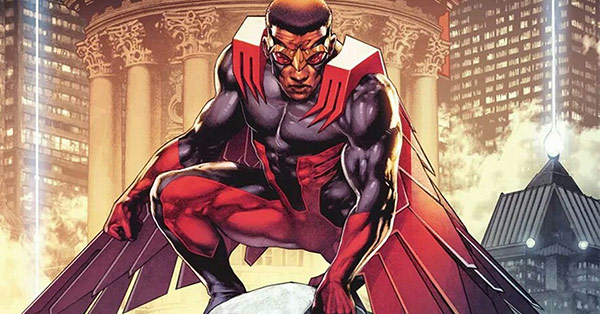 With Falcon & The Winter Solider being a huge hit and Falcon (now Captain America) now cemented as a key Avenger in the Marvel Cinematic Universe, it would only be right to include Sam Wilson in the game. Falcon has been awesome in the comics for many years and now that he is a mainstream hero, the inclusion of Falcon would be a great decision.

With his ability to fly, thanks to his Falcon wings, he would easily be able to traverse around Marvel’s Avengers world and being the master martial artist that he is, he would jump right into combat with ease. Falcon’s unique ability of bird telepathy could be a major factor in his gameplay, as we could potentially have access to his well-known companion Redwing. Hopefully with more varied mission by then, we could be use this to maybe scout for danger ahead on a stealth mission or even to distract enemies as well.

We could also have the potential of a Falcon and Captain America mission which would be a dream come true! They have taken down many of Cap’s villains together and this would be a great time add a Captain America villain like Red Skull, Crossbones, Zemo or the Serpent Society. Their partnership has been awesome for many years and I for one would love to see a team up mission where they would take down a Cap villain.

Alongside all of this, the alternate skins could be extra special. Especially if we got a certain Captain America skin that is well known to comic fans and now MCU fans as well. Now that would be amazing. Now this choice is the most farfetched but is also the one character I’d like to see the most. Wolverine is one of the most popular characters from Marvel but is obviously more well known for being a member of the X-Men. But make no mistake about it, over the years he has also been a key part of the Avengers at times as well. With the introduction of Wolverine to Marvel’s Avengers, it opens many doors to future storylines or even future games to be developed. This could lead us to the introduction of the X-Men and maybe even an X-Men game continuing in the Marvel’s Avengers universe, now this I would love to see.

But seriously, who wouldn’t want to wreak havoc with Wolverine’s claws and take down some A.I.M soldiers. The use of Wolverines claws can add endless possibilities as to how you could use him and considering that Logan is one of the best fighters in the Marvel universe, it would be a pleasure to be able to play as him. With an inclusion of a beserker rage attack, there is no way that he wouldn’t be most peoples first choice character on the game.

The X-Mansion in Westchester New York could be added as a new outpost giving us a chance to meet some of the X-Men and maybe explore more into the Avengers history with other heroes. And with Wolverines many outfits over the years, we certainly wouldn’t be short for alternate skins to use.

Ultimately, I feel that adding Wolverine to the game would have to be done much later down the line as right now it wouldn’t suit the current storyline. However, since Square Enix have expressed numerous times that this is a game that will be consistently adding new content for years to come, we can only hope to see Wolverine in Marvel’s Avengers one day!